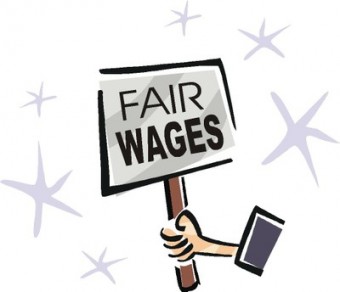 Construction workers, building security guards and cleaners who are under government contracts would receive a “fair” wage under legislation that Ontario’s governing Liberals introduced Tuesday and hope to pass before the June provincial election.

The new legislation – called the Government Contract Wages Act – would establish minimum pay rates for workers in those sectors and require contractors and subcontractors hired by the government to abide by them.

“It means that if you work on a government project … you will be paid fairly. Full stop,” Premier Kathleen Wynne said as she made the announcement at a union training facility for plumbers and steamfitters in Toronto. “This is about preventing employers from undercutting workers’ wages in order to lowball on provincial projects.”

Wynne said the bill will update fair pay legislation that has remained unchanged since 1996. Trade organizations have lobbied the government for the update for years and the Liberals have spent the past 12 months consulting with stakeholders, she said.

“We’re tabling legislation to enshrine the principle of a fair prevailing wage in law as well as provide the necessary support and enforcement to make it work,” she said.

Patrick Dillon, the secretary treasurer of the Provincial Building and Construction Trades Council of Ontario, said the legislation will not only help protect worker wages but ensure safety on the job.