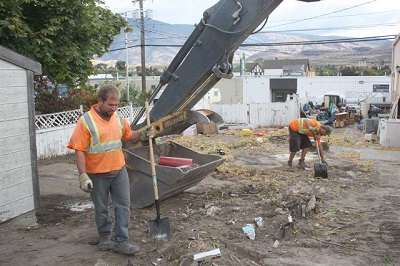 I personally have no problem with towns and municipalities issuing a clean-up order to owners of  unsightly properties within their boundaries. There is nothing worse for a homeowner or a business being next door to the community eyesore.

After many warning notices to the property owner, they need to abide by the local bylaws or sell the property to someone who will respect their neighbors. Basic common sense needs to implemented.

The owner of a previously messy property in downtown Oliver is disputing the cleanup bill charged by the Town.

But on Monday, council didn’t show any sympathy for the absentee owner of 480 Bank Avenue (former pawn shop site) that received several complaints about its unsightliness last year.

The Town enforced the bylaw by having contractors clean up the property and then billing the owner $6,666.45 for the job.

The owner, who is not being identified by the Town, said the bill should not have been more than $1,500 as previously discussed. Therefore, he wants the Town to review and correct the invoice.

But Town staff explained that the Good Neighbour Bylaw stipulates that all costs of property cleanup are the responsibility of the property owner.

Vaykovich said another contractor was subsequently hired to deal with the material, which was quite costly to remove and dispose of at the landfill.

Keep reading in the Oliver Chronicle