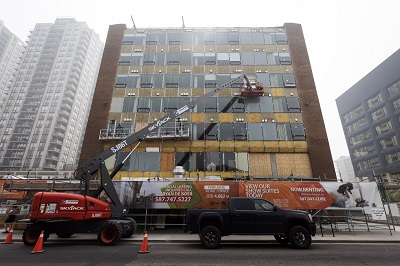 As reported on Bloomberg.com, when the lease on an Alberta Health Services office in Calgary came due for renegotiation two years ago, the rental market was so bad that trying to keep the tenants wasn’t worth it.

Instead, landlord Strategic Group took the unconventional step of letting the government agency leave and spent C$24.5 million ($18 million) to convert the seven-story building into an apartment complex. Aside from the renovation cost, the building sat vacant for almost a year. But those were risks the company had to take to cope with a market that’s been gutted by an exodus of oil-industry jobs.

“We’d still be losing money if they’d stayed,” Chief Executive Officer Riaz Mamdani said in an interview in a new apartment in the building, which has been re-branded as Cube. “The cost of keeping them in this building was greater than the value of the building. That just made no economic sense.”

Developers in Canada’s oil capital are converting workplaces to homes as office vacancies hover near record highs after an exodus of international producers and industry-wide job cuts. Following the 2014-2016 price crash, companies are grappling with a pipeline shortage that discourages growth. Encana Corp., Cenovus Energy Inc. and MEG Energy Corp. are among producers that have cut jobs in the past two years even as global crude prices rebounded.

The conversion trend is also taking root in Alberta’s capital of Edmonton, where new office towers have left older buildings without tenants, as well as in other cities where residents are eager to move downtown.