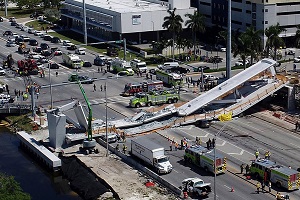 As reported in the New York Times, the pedestrian bridge that collapsed over a busy Miami street last year, killing six people, was doomed by a fatal design flaw, federal authorities concluded in a scathing review on Tuesday. The errors led to unusually severe cracking in the concrete that should have worried engineers and prompted the closure of the roadway below for safety.

Instead, Southwest Eighth Street, an eight-lane thoroughfare adjacent to Florida International University, remained open. The $14 million bridge, which was under construction by the university to connect students to the neighboring city of Sweetwater, fell on top of motorists waiting at a red light, crushing their cars under 950 tons of concrete and metal.

“The bridge was talking to them,” Robert L. Sumwalt, chairman of the National Transportation Safety Board, said with evident exasperation at a board meeting in Washington. “It wasn’t just talking — it was screaming that there was something definitely wrong with this bridge. Yet no one was listening.”

The 174-foot span, which had been prefabricated in a construction yard next to the roadway, was elevated into place five days before its catastrophic collapse on March 15, 2018. During that time, workers documented growing cracks on the north end of the bridge, at a node where a single plane of load-bearing concrete trusses began.

The cracks were 40 times as large as the maximum considered acceptable in a reinforced concrete bridge, Mr. Sumwalt said. Yet none of the many parties involved in building the structure recognized the gravity of the problem. Workers were attempting to stop the cracking by tightening the tension rods of one of the trusses at the time the bridge fell.

“To have a failure like this is astounding,” said Bruce Landsberg, the N.T.S.B. vice chairman.

He called the nearly 19-month review by the agency “one of the most complicated reviews I think we’ve ever done,” in part because of the bridge’s unusual design. Most pedestrian bridges are simple steel structures, but the university, a public commuter school, had planned to build an emblematic bridge that would become a new landmark.