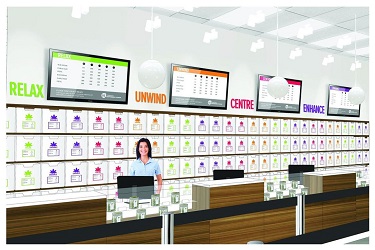 Some Nova Scotia liquor stores will soon be fitted with walled-off cannabis zones in preparation for pot legalization this summer, executives say.

One vacant store in Halifax will also reopen as the sole pot-only shop in the province.

Designs for 12 NSLC stores were released Monday by the corporation’s president and CEO, Bret Mitchell. Eleven existing locations will each undergo $500,000 renovations to create cannabis stores within existing liquor stores, Mitchell said. A 12th location — a recently shuttered NSLC store on Clyde Street — will be renovated to sell cannabis exclusively, at a cost yet to be determined.

“We have what I consider a modern, bright, really merchandise-intense full-service environment which we are going to roll in July,” said Mitchell.

Renderings of the store interiors look well-lit, with white walls and a few bright punches of colour. A wall of weed boxes behind the cash registers show off the variety of products on offer.

Senior vice-president and chief operating officer Tim Pellerin said the NSLC is still in the process of choosing cannabis suppliers, but it’s preparing for 150 products at the store-within-a-store shops, 300 products at Clyde Street and a total of 425 products on the NSLC website.

Pellerin said the assortment of products on offer will likely morph over time.

Keep reading on The Star Halifax