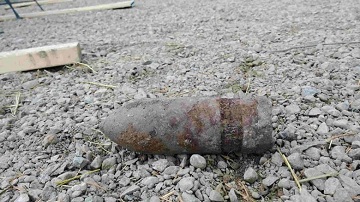 A North Okanagan plumber and gas fitter got quite the surprise Monday when he dug up an old explosive while digging a trench to install pipe on a property in Spallumcheen, B.C.

“I thought it was a rock and dug it out, and tossed it to the side,” said Josh Grahame, owner of Grahame Mechanical in Vernon.

However, upon closer inspection he realized, “that doesn’t look right.”

“At first I thought it was an axe head,” Grahame told Radio West’s Josh Pagé. “It actually looked like a bullet head from a gun, just a lot bigger.”

Grahame notified the homeowner, who called the police.

The unexploded ordnance, an explosive weapon or bomb that never went off or worked properly, was identified as a mortar round by RCMP.

In a statement, RCMP said the area has been cordoned off and the explosives disposal unit was sent to remove the ordnance.

“This incident is a good reminder for anyone who locates an explosive device to leave it alone and contact the authorities immediately,” said Const. Jocelyn Noseworthy.

This isn’t the first time an unexploded weapon has been found in the North Okanagan.

The Canadian military trained throughout the North Okanagan during and after the Second World War.

According to the Canadian government, seven people have died since the late 1940s on two of the Vernon-area legacy sites after encounters with unexploded ordnances.