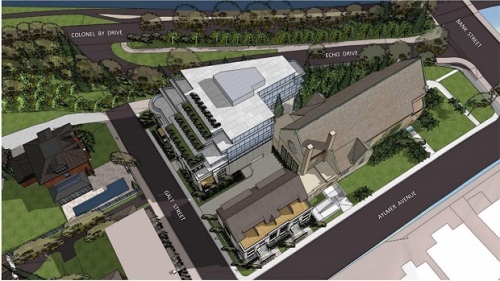 Ottawa city councillors have asked a landmark church in Old Ottawa South to lower the height  of a proposed condo development over fears it could ruin the view from the Rideau Canal.

Southminster United Church, which sits at the foot of the Bank Street Bridge alongside the canal, wants to demolish an ageing addition and replace it with a six-storey condo building and four three-storey townhouses, a redevelopment it says is necessary to ensure the congregation’s financial survival.

But some members of the community say the height of the condo building will tarnish the view from the Rideau Canal because it will be visible over the treeline.

There are no city rules around the treeline along the canal and the height of buildings. City staff actually recommended committee approve the project.

On Tuesday, however, the city’s planning committee asked the developer behind the project, Windmill Developments, to partner with city staff to see if there’s a way to shave 3.2 metres off the height of the building before councillors vote on the project.

The funds from the development are desperately needed, members of the congregation told the committee. They said the church has fallen on hard times and can’t keep up with costs. The development is meant to ease the financial burdens the church has been struggling with for the last several years.

While some members of the community agree that the church is a vital part of the community they don’t want to lose, eight people asked committee to reject the congregation’s proposal unless the top storey of the condo building is removed.

“Ontario has only one UNESCO world heritage site, the Rideau Canal,” said Laura Urrechaga, who spoke to committee on behalf of the group leading the opposition to the project.