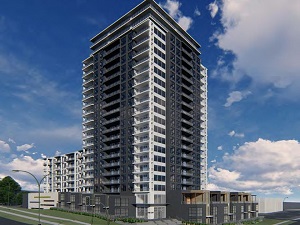 Tricar Group wants to build a 22-storey, 230-unit highrise in a residential neigbourhood in Masonville, and neighbours are gearing up to oppose it, saying it’s too big for the area dominated by single-family homes.

“I don’t know if we can stop a tower, but 22-storeys is incredibly unsettling and an eyesore,” said Peter Newson, who lives in a nearby condominium.

The tower at 230 North Centre Rd., near the intersection of Richmond Street and Fanshawe Park Road, would sit on 1.1 hectares of land and is near single family homes, one and two-storey condominiums and a seniors’ home.

“I’m worried about congestion. Fanshawe and Richmond is already a hugely strained intersection and this will add hundreds of more people.”

The city has just concluded getting public input on the project and it will likely go to the city’s planning and environment committee in May, said city planner Mike Corby.

Although the neighbourhood is zoned medium density, it is considered a “transit village” because Masonville will become a hub as part of the bus rapid transit system. A transit village will allow high- density development, up to 22-storeys.

“These are the types of developments we are seeing in transit villages, we do want to see intensification,” he said.

Victoria Digby, also a neighborhood resident, is leading the opposition to the tower and vows a fight when it goes to the planning committee.

“It is very disturbing. I am in favour of developing, of growing, that is healthy, but when it happens in an established neighbourhood there needs to be some sensitivity,” said Digby.

She is bothered by the scale of the project and believes proper notice was not given to those in the area — she found out from signs posted at the building site advertising a public meeting,

“There are people who are literally a few houses down from it, and did not know.”

The city did send notification to those living 120 metres from the site, as the city requires, said Corby.