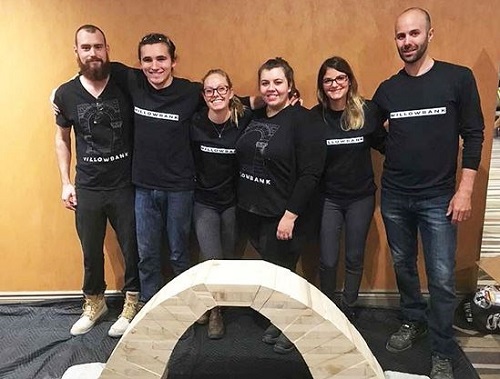 Competing against some of the top engineering schools in North America, Willowbank students demonstrated they don’t build them like they used too.

Except that they do.

The students recently returned from the Association for Preservation Technology International- National Trust for Canada conference in Ottawa, where they took part in the finals of a multi-phased student design-build competition among universities in the research, design, construction and testing of historic arches.

Nancy Oakley, director of education at Willowbank School of Restoration Arts, said the students started back in January when students studied the arch contained in the former post office in Niagara Falls, which was designed by architect Thomas Fuller.

Up against such schools as Carleton, Texas A&M University and Nebraska University, the team from Willowbank was eventually shortlisted from eleven teams to five.

Working under the watchful gaze of conference attendees, the students conducted a final build and test using the traditional catenary or ‘chain’ method and constructed from laminated wood.