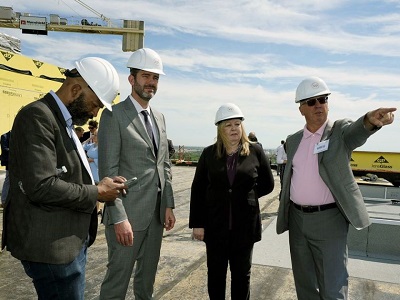 A highrise tower for seniors being built at a Westmount strip mall was touted Monday as one way to redevelop mature Edmonton communities and provide new housing options.

“As every city ages, we need to have more diversity in our housing supply,” Mayor Don Iveson said Monday following a topping-off ceremony for the 14-storey structure.

The Village at Westmount will have 105 leased units and assisted living spaces when it opens next spring on one corner of the 1960s-era Westmount Village mall at Groat Road and 114 Avenue.

While aging malls such as Meadowlark have been repurposed for offices, Greg Christenson, co-owner of project builder Christenson Developments, said he only knows of a couple of other Edmonton sites that have made a major move into housing.

He sees a strong future for this kind of development after the population dropped in older areas from the 1970s to the 1990s.

“We’re promoting complete communities that are inter-generational and inclusive … What we’re trying to do is recreate an urban village.”

Although such projects keep parents and children closer together and near services, creating them has been challenging, Christenson said.

One problem was parking. Zoning regulations required 1.5 stalls per unit, but supportive community provisions reduced that figure to at most a half-stall because many seniors don’t drive, making the development cheaper, he said.

“We have sites in Sherwood Park where the residents are putting in pickle ball courts because they’re not using the parking stalls.”

He hopes to erect a second tower with another 80 units starting in 2020 that would be completed two years later. The entire development will cost $60 million.