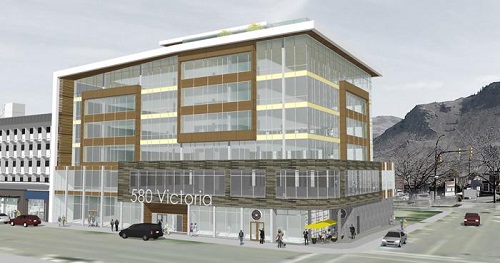 A new office development in the works in Kamloops is sparking excitement in a downtown area revitalization while attracting new businesses and creating jobs in this Interior city.

A six-storey building development, called 580 Victoria, is part of National Hospitality Group’s (NHG) holdings that already include Hotel 540 and commercial space at 560 Victoria in Kamloops, which KPMG is moving into in 2018.

The office space is a huge draw for Kamloops as it offers new and unique inventory that otherwise didn’t exist.

Bryan Pilbeam, vice-president and general manager of NHG, says that feasibility studies revealed a lack of this type of development.

“The overwhelming feedback indicates a market void for forward-thinking organizations that are focused on their employees’ happiness, well-being, contribution and creative output,” says Philbeam.

The office spaces will attract new businesses that can grow in this space and attract more employees, and also appeal to companies that haven’t been able to find space that’s large enough for their operations.

“We’re planning on orchestrating a hub with organizations that want to be around like-minded companies,” says Philbeam.

Previously, Kamloops had been missing out on gaining new business because of the limited supply of office space. But with 580 Victoria, the city is considered a top choice as employers look for large, contemporary spaces with natural lighting, excellent air quality—and all the amenities for their employees.

The building will particularly appeal to companies wanting a modern, employee-focused office experience, something that isn’t currently found in Kamloops.