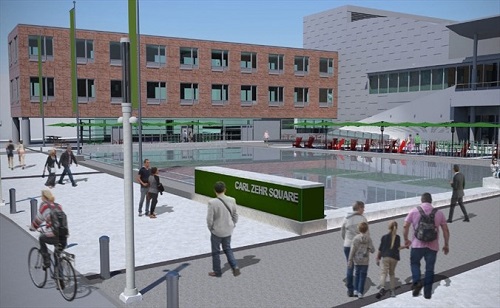 Council approved a scaled-down version of a rehabilitated Carl Zehr Square Monday, though it will be another year before it’s clear where the city will find the $5.7 million needed for the project.

The latest plans will repair the crumbling pavers that cover the 24-year-old square, stop the leaking and salt damage into the parking garage below, and make the square more usable for large events as well as more accessible for the disabled.

“This is our gathering place,” said Coun. Dave Schnider. “It’s a source of civic pride. There’s great value to this.”

But for the square to continue to play that pivotal role in the life of the city, it’s important not to be so hung up on cost that quality gets sacrificed, he warned. “We have to be careful of not cutting costs too much.”

The design approved Monday was somewhat scaled down from earlier ideas presented to council a year ago.

The new design, which will be refined over the next year, will replace the existing fountain with a shallow water basin about five centimetres deep, with programmable jets along two sides, which slopes gradually away from city hall.

Doing so will make the popular square a much more flexible space, especially for large events such as Oktoberfest. Right now, it takes days and about $900 to turn off the fountain and remove the fountain heads to use the entire square for big events.

But the original plans for a zero-edge fountain, with gradually sloping sides, had to be scrapped because of the limits of the site. The parking garage roof beneath the square, and the fact the land slopes both toward King Street and toward Young Street, made that impossible, said Mark Zuzinjak, the consultant with GSP working on the project.

Instead, there will be a gradual slope on the side closest to city hall; the side along King Street will have a low step, while the two sides along College and Young will be flanked with low walls topped with benches.

The parking garage roof also precludes the planting on any trees on the square. The plan would add several 4.9-metre square umbrellas.