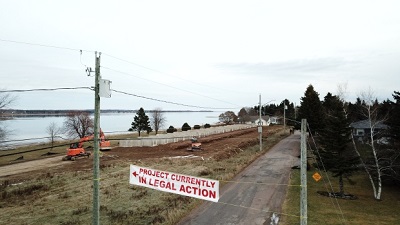 A condominium developer in Shediac Bridge has agreed to stop construction on a controversial $8 million building until a legal battle is resolved.

Until next spring, the 33-condo building will not get any higher than 3.35 metres, although the design calls for more than nine metres.

Local residents claim the three-storey waterfront project at Indian Point would violate a decades-old covenant against any development higher than 3.35 metres. That matter is still before the courts.

The decision in Moncton came after the developer CG Group agreed in an affidavit to stop work at the contested height until the matter of the covenant was resolved in court at a later date.

“What we wanted, we got it —  not the way we asked for it … because of signed documents we got the same results as what we asked for,” Marc Girouard, the lead plaintiff in the lawsuit challenging the development, said outside court.

“We don’t want them to go any further than it is now.”

The project, Seagull Condo Resort, started making waves last year, after the developer registered an environmental impact assessment in September, which the province approved in May.

Girouard’s grandfather used to own the land where the condos are being built. He sold the land in 1964 to the Seagull motel, and Girouard claims there was a covenant on the deed that no future development would be higher than 3.35 metres.

The new condo building borders Route 134, right before the bridge at the mouth of the Shediac River.