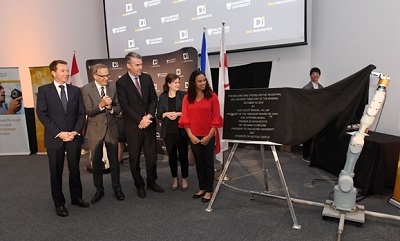 The facilities on the Sexton campus were paid for by $32 million from the federal government and $32 million in donations from some of the region’s biggest corporations, including $10 million from energy conglomerate Emera and $1.5 million from Irving Oil.

One of the new buildings is officially named the Emera IDEA Building. Other donations included $2.5 million from Micco Companies and Clearwater, $3 million from businessman Lukas Lundin and $6 million from engineering school alumnus entrepreneur Richard Murray.

Murray’s donation was announced Wednesday. The new Design Building is being named after him.

The project was kick-started with a $1 million donation from Marjorie Lindsay in the name of her late husband, the Halifax developer John Lindsay. Treasury Board president Scott Brison acknowledged the contribution in his remarks at the grand opening celebration.

“Marjorie said at the beginning, ‘I think something big is going to come from this.’ Well Marjorie this is big,” Brison told the crowd in the 450-seat Irving Oil auditorium, which is part of the new Design Building.

“I do not believe we have too many universities,” McNeil said in his remarks.

The province did not contribute to the project.