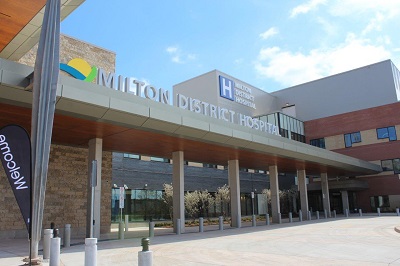 PCL Constructors Canada Inc. (Toronto) is pleased to announce the achievement of total completion on the Milton District Hospital expansion project, signifying that all construction activities have been completed.

“The Milton District Hospital expansion project is a case study for design-build excellence,” says PCL Toronto district manager Kelly Wallace. “Achieving total completion within seven months of substantial completion on a project of this scope says volumes about the collaboration and respect exhibited by all partners, which was a critical success factor in achieving this tremendous outcome for the people of Milton.”

The project achieved substantial completion in April 2017, and Halton Healthcare began providing patient care in the new space on October 1, 2017.

Ensuring the existing Milton District Hospital could continue to service the community during construction was key to the success of the expansion, which was built to meet the increasing care needs of one of Canada’s fastest growing communities, and to accommodate new technology.

“Reaching final completion demonstrates another significant milestone for the Milton District Hospital project. Plenary remains incredibly proud of the collaborative working relationship we have with all the project partners, and we look forward to participating in the ongoing success of this facility,” said Angela Clayton, Plenary’s group head, Buildings Division.

Take a look back at how the Milton District Hospital expansion project came to reality in this short video, How a Community Built a Hospital.

In addition to the over 600 workers on site daily at the peak of construction who contributed to the project’s industry-leading safety record, the major partners involved in delivering the project on time and on budget under Infrastructure Ontario’s Alternative Financing and Procurement delivery model include:

PCL is a group of independent construction companies that carries out work across Canada, the United States, the Caribbean, and in Australia. These diverse operations in infrastructure, heavy industrial, and buildings markets are supported by a strategic presence in 31 major centres. Backed by PCL’s 111-year legacy, and with more than four decades of experience in Southwestern Ontario’s dynamic construction market, the Toronto office is PCL’s largest district with more than 550 of the construction industry’s most-talented professionals and an annual construction volume of more than $1.0 billion. For more information, visit PCL.com/Toronto.