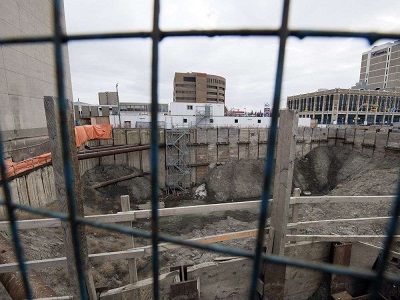 With millions at stake, creditors pitch hotel on Capital Pointe site in Regina

As reported in the Regina Leader-Post, creditors with millions sunk in the Capital Pointe hole are trying to save it from backfill, but they’re having little success persuading the city to hold off on burying their investment.

Chris Nichilo, CEO of Ontario-based Magnetic Capital, said he’s leading a group of creditors who want to take over the long-abandoned property and build a hotel above a parkade.

He said he’s visited Regina twice to plead his case with senior officials, including the city’s lawyer.

“Our position was simple,” he told the Leader-Post. “We have a vested interest in seeing something great built on that site, as does the city. So why not work together?”

Mayor Michael Fougere said he’s heard nothing of Nichilo’s plans. He urged him and his team to “gain control of the site” before pressing the city to halt its efforts.

“They need to take the proper steps, which is frankly to become owner of the property,” Fougere explained. “And then they have the authority to say ‘stop, please stop, don’t fill the hole in.”

Nichilo said the three leading creditors have $6.5 million in mortgages at stake. But the city plans to have a contractor begin filling the hole starting this month and tack the roughly $3-million cost, including contingency, onto the property’s tax bills.

The city’s rights to its taxes would trump the mortgages if the property is sold or seized. Nichilo also supposes filling the excavation pit would drastically reduce its value.

“Once that site is backfilled, it will take years before anyone will develop it,” he explained. “And the tax bill alone will be more than the land is worth at that point, making it very difficult to sell to a developer.

“It would wipe everybody out,” he added.

Fougere said the city remains committed to backfill for the time being. A provincial appeal board has issued an order to fill the hole, he noted. He believes action is necessary to deal with a “public safety issue.”

He said the city is prepared to look at proposals, though only if the hypothetical developers could show they owned the property. Fougere said the city would then be “obligated” to listen and would likely cease backfill operations.