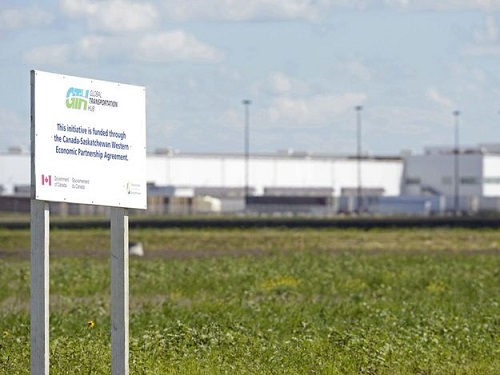 The RCMP has confirmed its investigation into land transactions at the Global Transportation Hub (GTH) is completed and the matter is being reviewed by Crown prosecutors in Manitoba.

“We are not in a position to provide a timeline at this time as to when that process might be completed, but the RCMP is committed to advising the public as to the results when it is appropriate to do so,” said an RCMP spokesman, adding “we are working with the Manitoba Crown Attorney’s office on this file.”

The spokesman said the investigation concluded “within the last couple of weeks.”

The investigation into the GTH deals — which saw two businessmen connected to the Saskatchewan Party profit off of land purchases made by the government at inflated prices — has been ongoing since at least April 2016.

In September, the Leader-Post reported the RCMP was close to finishing its investigation and that, according to sources, Manitoba prosecutors were reviewing preliminary findings.

“Members of the federal policing section were tasked with conducting the investigation, as they have expertise in the financial crimes investigations,” said the RCMP’s Staff Sgt. Rob Embree at that time.

The premier’s office said in a statement in September: “When the RCMP conclude their work, they provide the information to the Justice Ministry. At that point it is up to Prosecutions whether they send it out of province to be reviewed or not. Prosecutions is completely independent from government, therefore government does not ‘ask’ or ‘order’ them to handle cases in a specific way.”

On Thursday, Saskatchewan’s Attorney General Don Morgan said, “We have no role in it. The first that I knew the police had completed their work was when I heard it from your office this morning,” adding “we wouldn’t comment on anything while it’s still under investigation.”