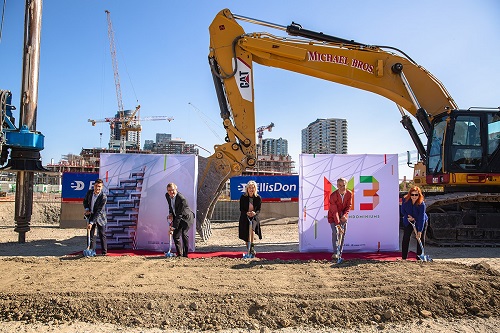 With M City’s first two towers, M1 and M2, emerging on the Mississauga skyline, Mayor Bonnie Crombie, Rogers Real Estate Development and Urban Capital Property Group were once again on site at Burnhamthorpe and Confederation Parkway to mark another precedent-setting milestone for this transformative $2.5 billion community.

“Rogers Real Estate Development is thrilled with the progress being made at M City in Mississauga. Our goal has always been to develop a world-class community befitting any city in the world. With M3 moving on to construction, we are one step closer to that goal,” says John Anderton, Vice President, Treasurer, Rogers Real Estate Development Limited. “Mississauga’s stature has only grown since we first announced M City, which is a validation of our unwavering belief in this city and our continued commitment to deliver cutting-edge design that resets expectations of what Mississauga should look and feel like.”

M3’s stunning, slender design features a subtle twist at the lower and upper parts of the tower and a dramatic sloped crown at the top. The design is rooted in the context of Mississauga’s downtown and was the result of a design competition held by Rogers Real Estate Development Limited and Urban Capital, which received proposals from several of the country’s top architecture firms. The tower’s verticality is enhanced by a dynamic façade defined by sawtooth balconies that create a black and white diagonal pattern up the building, providing scale, texture and materiality.

The tower form is crowned by a sloped and stepped top that complements the diagonal balcony pattern and creates incredible terrace units, giving residents an opportunity to experience the city like never before. M3 will also provide unfettered access to abundant green spaces as well as grade-related retail along Burnhamthorpe, and approximately 20,000 sq.ft. of office space. The building’s unique design allows for an extensive amenity pavilion that includes an indoor pool and gymnasium, providing one-of-a-kind views of the neighbouring park.

“M3 cements the notion that M City is a catalyst for the evolution of Mississauga,” says Mark Reeve, Partner at Urban Capital Property Group. “I’m very proud of our tremendous team, which includes the owner/developer, Rogers Real Estate Development Limited, IBI Group, Cecconi Simone, Ellis Don, Cooper Robertson and our other leading-edge consultants. I’m especially proud of the team we have on-site, who have been able to persevere under unprecedented conditions and ensure construction remains on schedule. It’s a testament to their skill and dedication.”