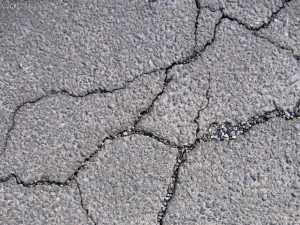 A look at the science of sustainable pavements

WHEN IT COMES to beating back climate change, the big ideas get the most buzz. But among talk of banning gas-burning cars, making tech companies run server farms on renewable energy, and geo-engineering the planet into a state of salvation, the people researching pavement have a message: Don’t overlook that boring stuff beneath your wheels and your feet.

After all, pavement—and the asphalt, concrete, and steel that live inside it—is everywhere. If you look up and out a window right now and don’t see any, I’ll pay you a dollar. (I won’t.) And with the federal government reportedly inching—really, inching—toward a trillion dollar injection into American infrastructure, now may be the perfect time to make the gray stuff just a shade greener.

Past efforts to combat the carbon footprint of pavement have shown an annoying tendency to backfire. A pavement composed of all-recycled materials sounds great, until you consider that it requires more truck-driving construction workers to maintain it, and might need to be replaced in a couple of years instead of a handful. You can alter the makeup of pavement to retain less heat and reduce air conditioning use—but you can also go too far and trigger higher heating costs.

“I got into this because there was so much pavement greenwashing and so much marketing and cherry-picking isolated facts,” says John Harvey, a civil and environmental engineer who heads up the University of California Pavement Research Center. “We’re trying to bring order and standardization and fill the gaps so that everybody can assess any pavement claim, or any decision.”

The good news is that researchers like Harvey have been studying the entire lifecycle of pavement for the past decade or so, from the quarries to the production to the paving to the potholing that restarts the cycle. Now manufacturers and governments are cottoning onto their findings—and starting to make changes to the ways they make and install it.

Those changes won’t be enough to save humanity from a 2-degree-Celsius swing, a global temperature hike that will risk worldwide flooding, crop failure, and coral reef damage. But they can make a difference. In California, for example, pavement accounts for about 0.7 percent of greenhouse gas emissions—that’s 3 million metric tons of the stuff every year.
Keep reading this blog on Wired
TweetShareLinkedIn
Submit YOUR Content ❯