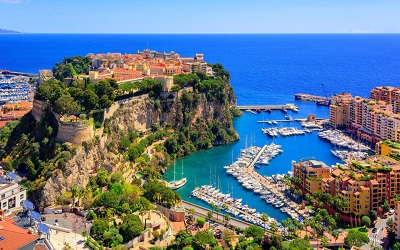 A look at Monaco’s ambitious $2.3bn project to expand into Mediterranean Sea

Monaco may be the second smallest country in the world, but it is also one of the richest. Almost a third of its residents are millionaires, lured to the French Riviera city state by its lenient fiscal policy — income tax was abolished in 1869. It is estimated that 70% of the population is foreign-born, while just 10,000 are locals, “the Monagesque.”

Consequently, Monaco’s 38,000 residents are today squeezed into less than one square mile of land (2.02 square kilometers) — a territory smaller than New York’s Central Park.
And when an additional 40,000 people cross the borders from France and Italy each day to work, the problem only gets worse.
As the people and money have poured in, more and more land has been reclaimed from the sea. Since the early 19th century, Monaco has gained an additional 100 acres, accounting for 20% of its territory.
Now construction has begun on a €2 billion ($2.3 billion) project to extend the natural contour of Monaco’s coastline a further 15 acres into the Mediterranean.
Keep reading on CNN.com
TweetShareLinkedIn
Submit YOUR Content ❯