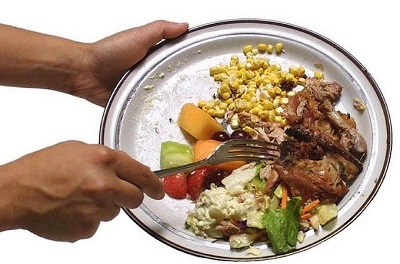 In the U.S., construction is a big source of waste and pollution. The construction industry accounts for an estimated 39 percent of CO2 emissions in the country and 534 million tons of waste – more than twice the amount of municipal solid waste. A lot of this waste can be attributed to the linear economy that runs the industry – one that is built on a “take, make, waste” model, tapping raw resources and recycling little. In fact, an estimated 90 percent of the industry’s waste comes from the demolition of old buildings and 10 percent is from the construction of new buildings.

Facing this issue, the engineering firm Arup is advocating that the industry move to a circular economy, or “a continual feedback loop that aims to recycle as much as possible, throw away as little as possible, and use as few raw resources as possible,” according to Fast Company. And they way they think this can happen is by tapping another major waste stream for material: food.

About half of all the food produced in the world ends up in the trash, accounting for about 60 million tons of food. Applying circular thinking to this issue in conjunction with construction waste could mean pouring less produce into landfills while simultaneously making building materials that are recyclable to keep construction waste out of dumps. Meanwhile, some materials could be grown like crops, eliminating excess waste entirely. In their report The Urban Bio Loop, the engineering firm sees our future buildings made from pineapples, potatoes, mushrooms, corn, oranges, bananas and more.

“It is well known that the so-called ‘business as usual’ scenario does not represent a viable option for a sustainable future and that different development models have to be identified for our society to continue growing and prospering in the future,” Arup writes in its report. “The construction industry must reflect this urgency of change–probably more than others. In fact, it is still permeated by a number of detrimental factors such as the use of high impact materials, non-reversible building solutions, low-efficiency processes and manufacturing.”

A number of companies and designers are already experimenting with food-based materials for construction. In 2014, MoMA used 10,000 bricks constructed from mushrooms to build an experimental tower. The startup that grew the materials, Ecovative, said the bricks can be tailored to different densities and substitute particle board and Styrofoam for insulation. In Germany, the company Wood K Plus has been experimenting with a building material made from corn cobs, which are strong, insulating, and inexpensive. The boards could be used for lightweight walls, doors, and furniture.

Keep reading this blog on the World Economic Form website