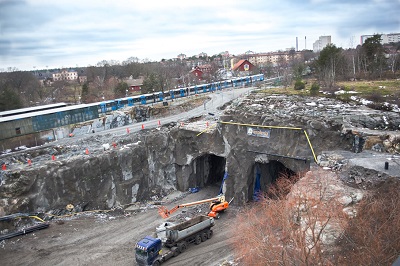 Stockholm is a city known for its waterways. Founded on an archipelago of some thirty thousand islands, bodies of water are rarely more than a stone’s throw away in the Swedish capital. An appreciation for lakes, rivers, and nature in the fullest sense runs high in Swedish sentiment. It’s not by chance, after all, that Stockholm is world-leading in air quality, access to green spaces, and sustainable urban planning.

That green mentality recently challenged engineers tasked with the design and construction of a new six lane bypass running 21km (more than 13 miles) north to south along the rapidly expanding city’s western edge. How can you tackle a task that big whilst keeping the environmental impact to an absolute minimum?

“Typically, in an area with as low a building density as we have here, you’d take an overground route and construct bridges where necessary,” Johan Brantmark, E4 project manager for the Swedish Transport Administration tells Ars. “That would be cheaper, and far easier of course. But we’re motivated by other priorities, not the least of which is to preserve the surrounding environment. For that, tunnelling is the best approach.”

The solution settled upon involves taking nothing less than 18km (11 miles-plus) of the bypass underground, with twin tunnels running three lanes abreast in each direction. Comprising three tunnel sections in total, the winning design means that the E4 bypass avoids six nature reserves or places of cultural significance, including the grounds of Drottningholm Palace—a UNESCO world heritage site on the island of Lovö—and the need for bridges over the crystal waters of the Mälaren strait. Not for nothing either, E4 will be one of the largest underground highways in the world, with its longest tunnel section spanning 16km (nearly 10 miles) from the bypass’ southernmost point. At its deepest, the highway will bottom out at 80m (close to 90 yards) below the surface of the Mälaren.