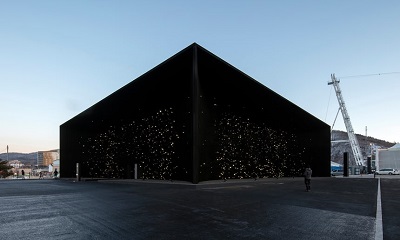 A look at the darkest building on Earth

The pistes of Pyeongchang may be blinding white with snow as the Winter Olympics kicks off in South Korea, but among the ice rinks and bobsleigh tracks stands something completely different: the darkest building on the planet. Lurking between the competition venues like an angular black hole, it looks like a portal to a parallel universe, waiting to suck unsuspecting ski fans into its vortex. But this is not the latest high-tech defence against North Korean attack. It’s a temporary pavilion for car giant Hyundai, designed by British architect Asif Khan, using a material developed in Surrey.

Described as the world’s largest continuous “nanostructure”, the building has been sprayed with a coating of Vantablack Vbx2, a super-black material that absorbs 99% of the light that hits its surface, creating the illusion of a void.

“It’s like a nano-scale coral reef,” says Ben Jensen, chief technical officer of Surrey Nanosystems, which has developed the material. “Photons get into it and they bounce around within its structure until they’re all absorbed. The optical cavities in the ‘reef’ are around 1,000th the width of a human hair.”

The material was developed for architectural application after the interest stirred up by the launch of the company’s original Vantablack S-VIS in 2014, which it controversially licensed exclusively to the sculptor Anish Kapoor. Made of vertically aligned carbon nanotube arrays – hence the name Vanta – the substance was invented for space and defence use, to reduce atmospheric distortion in telescopes and cut out stray light refraction from polished lenses. But Kapoor saw its potential for his perception-bending sculptures, describing it as “the blackest material in the universe … it’s literally as if you could disappear into it”.

His exclusive deal to use the material raised eyebrows in the art world and prompted artist Stuart Semple to develop the “pinkest pink” and “glitteriest glitter”, available for anyone to buy on the internet, with the specific exception of Kapoor. “It just seemed really mean-spirited,” said Semple, “and against the spirit of generosity that most artists who make and share their work are driven by.” Kapoor responded by posting a photo on Instagram of his middle finger, dipped in the fluorescent pigment.