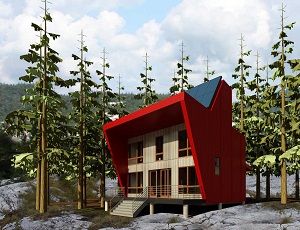 A look at 10 Canadian companies that specialize in sustainable, eco-friendly architecture

Anyone who lives in Canada knows the natural environment plays a huge role in its citizens’ lives. Hiking, camping, canoeing, skating and skiing are commonly enjoyed (as weather allows), and most Canadians take great pride in their country’s natural wonders. Not coincidentally, the nation also tends to be a hub for environmentalists, so Canada has its fair share of “green” buildings.

Several larger projects and initiatives have gained international attention, such as North America’s first carbon-neutral hospital (Sechelt Hospital in B.C., below, by Farrow Partners in association with Perkins+Will) and another North American first: Toronto’s Green Roof Bylaw, in effect since 2010. “The T-Dot” – as locals call the city – was recognized by the Annual Green Roof Industry Survey (2016) for installing the most green roof area of all North American cities (more than 600,000 square feet), followed by Chicago  in second place.