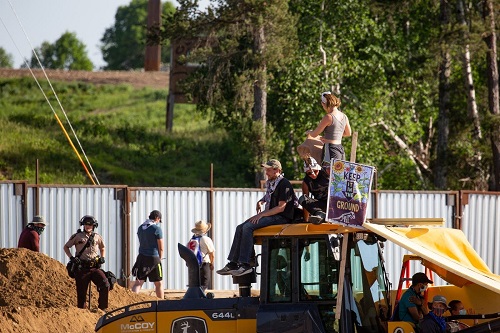 For several years now, environmental and tribal groups battling the Line 3 oil pipeline have fought the project in front of state regulators, in the courts and on the streets.

They’ve dotted the route with resistance camps, and they’ve chained themselves to branches of banks with ties to the project.

Their opposition so far hasn’t stopped the pipeline. Enbridge Energy says it is more than halfway through building the $4 billion project across northern Minnesota.

So now activists are taking their protest to the next level.

On Monday morning, hundreds of people trespassed onto the Two Inlets pump station site a few miles south of Itasca State Park to protest the ongoing construction of the new pipeline, which will replace a line that’s been carrying Canadian tar sands oil across northern Minnesota since the 1960s.

Dozens locked themselves to bulldozers, excavators and other construction equipment using devices known as sleeping dragons, so law enforcement wouldn’t be able to easily cut them free.

“To see people engaging in personal risk like this, and to see so many young people and folks of all walks of life, it’s so beautiful and powerful,” said Tara Houska, founder of the Giniw Collective, one of dozens of groups that organized the week’s actions. “It’s an incredible moment.”

The Indigenous-led, multiday event, called the Treaty People Gathering, began over the weekend and is expected to reach into the week, with prayer, marches and direct action.

Organizers say they hope to draw attention to the fight against the pipeline that they argue will exacerbate climate change and threaten the waters of treaty lands in northern Minnesota.

Their goal is to push the Biden administration to stop the Line 3 project, as it did the Keystone XL pipeline.

“Without direct action, and people engaging in personal risk,” Houska said, “the pressure just isn’t there.”