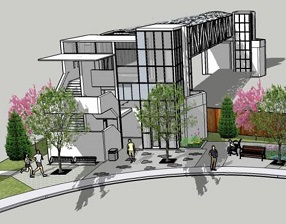 King-Liberty pedestrian bridge construction to start this summer in Toronto

Residents of Toronto’s Liberty Village neighbourhood will soon be more connected to King Street and the rest of the city.

The City of Toronto has announced that construction on the King-Liberty pedestrian cycle bridge, which was initially approved by city council in 2011, will begin early this summer.

Jeff Dea, manager of infrastructure planning for the city, says the bridge will be a “key connection.”

“It’s going to let people in Liberty Village get out to the north more easily so that they can access the King streetcar for example, and communities to the north like Queen West,” Dea said in an interview with CBC Toronto.

“Vice versa, people coming into the area to work are going to be able to access King-Liberty from King West more easily.”

So far, he said, the bill for the project is approximately $11.5-million, but the final cost will vary depending on their successful construction bid.

The bridge will stretch above the Metrolinx rail corridor and across Douro Street, south of King Street, to the western edge of Western Battery Road into the centre of Liberty Village.

​Liberty has been been characterized as an isolated community with few entry points. As of right now, the only ways into the area is via Strachan Avenue, Atlantic Avenue, or through the Exhibition GO Station tunnel.

On its website, the city says the bridge will provide a “convenient and more direct route”between Liberty Village and King Street West.

Construction of the bridge is expected to be completed by the summer of 2019.