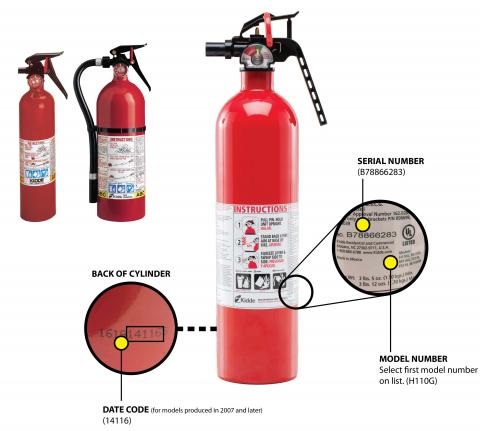 Kidde, in conjunction with Health Canada, has announced a recall to replace certain Kidde fire extinguishers. A copy of the press release and the safety notice are enclosed. Kidde has sent copies to our retail customers with instructions to post a copy of the safety bulletin in locations that sold these extinguishers.

We value our relationship with the Council of Canadian Fire Marshals and Fire Commissioners and Canadian Association of Fire Chiefs and would appreciate you spreading the word about this important safety recall in your fire safety efforts.

This replacement program was initiated because certain fire extinguishers can become clogged or require excessive force to activate, posing a risk of failure to discharge. In addition, the nozzle can detach with enough force to pose an impact hazard.

As the safety of our customers is our priority, we are working with customers to obtain all recalled units and provide replacement options.

Plastic handle fire extinguishers: The recall involves 23 models of Kidde fire extinguishers manufactured between January 1, 1973, and August 15, 2017, including some models that were previously recalled in March 2009 and in February 2015. The extinguishers were sold in red, white and silver, and are either ABC- or BC-rated. Models are as follows:

If you receive consumer inquiries, please immediately direct them to contact Kidde at (855) 233-2882 between 8:30 a.m. and 5 p.m. EST Monday-Friday (excluding holidays), or between 9 a.m. and 3 p.m. during the weekend to determine whether their extinguishers are affected. They may also visit www.KiddeCanada.com.

If you have any questions, please contact Neal Zipser, Kidde’s community affairs manager, at Neal.Zipser@KiddeUS.com.