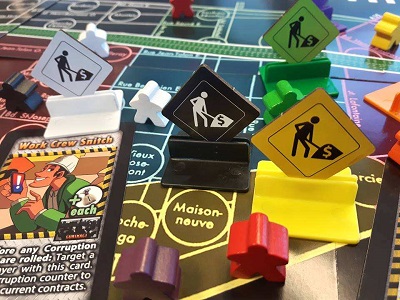 To pass the time while stuck in infernal traffic on Highway 40 this summer, David Loach came up with the quintessential Montreal board game: Construction & Corruption.

He spent a few hundred dollars to manufacture prototypes so he could enjoy the concept with his friends.

Now he’s hoping other Montrealers will want to play with the big boys.

On Saturday afternoon, Loach was showing off the game at the Victory Point board game café on Queen Mary Rd. In the coming days, he plans to launch a crowdfunding campaign via Kickstarter.

Construction & Corruption is a chance to laugh at two of the city’s most frustrating flaws, said Loach, a board game enthusiast who has a day job as a multimedia editor. “It brings a bit of levity to a situation that’s a little dark.”

Loach described it as a “negotiation game where players bribe, cajole and convince each other,” though bribes and promises are not binding.

The game starts when players are handed cards that give them a borough in which to do construction work.