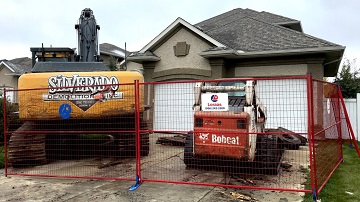 As reported on Global News, a Briarwood home valued at more than $650,000 will not be bulldozed in the immediate future now that a Saskatoon judge has stepped in.

The homeowner, Yu Liu, lives in China and was unaware of multiple orders from the City of Saskatoon, according to court documents filed on Tuesday.

A day earlier, a city staffer who speaks Mandarin was able to tell Liu about the numerous violations — including a flooded basement and mouldy walls.

Liu paid someone else to manage the property while he lives outside of Saskatchewan, Liu’s lawyer, Ling Ma, stated. He found out about the “mismanagement” through local news, his lawyer said.

“The Applicant did not have any knowledge of the orders until his cousin who lives outside of Saskatchewan read the news and informed him,” Ma wrote.

Ma said her client sought an injunction to “preserve the property and evidence” at the home located at 166 Beechdale Cres. At this point, Liu is not alleging the city acted in bad faith, and no damages from the city are being claimed.

If the city does go ahead with demolition, Ma said a lawsuit would follow — though her statement didn’t indicate whether the city or property manager would be targeted.

On Tuesday, Court of Queen’s Bench Justice Richard Elson granted a ten-day delay on the city’s demolition plans. The measure is temporary while the sides compile evidence.