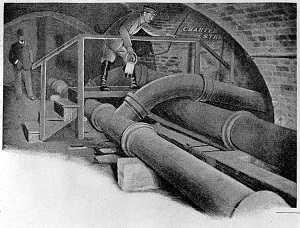 Is the urban water and sanitation sector frozen in time?

As blogged on World Bank Blogs, if time travel were possible, and an engineer from the 1860s could travel in time to 2019, he (the first female engineer had not graduated yet) would not recognize much of the technology we have today.  Personal computers, cell phones, cars, planes, and antibiotics would probably be unfathomable to him.   But he would definitely recognize our current piped water and sanitation (WSS) infrastructure, as it looks and operates almost exactly the same as it did 150 years ago.  Certainly, there have been significant improvements in the sector, especially in water and wastewater treatment, but the principles on which the piped WSS technology is based have not seen any fundamental changes since the 1860s, when it was (re)introduced on a large scale.

Even though the world of WSS utilities has changed dramatically since the mid-19th century, this has not yet resulted in a big spur of innovation in the WSS sector.  When looking at the urban WSS sector specifically, the contrast with the energy sector is stark, as both sectors share some similar characteristics.  Yet, when taking a look at the number of patents filed and the volume of global investments in the energy and water sector, the water industry is lagging far behind.

So why has innovation been so elusive?  Explanations range from fragmentation of responsibilities in the WSS sector, sunk cost fallacy thinking, risk averseness and the monopolistic structure for service provision.    Vested interests, pricing and subsidy policies, and regulation also play a role.  These explanations directly relate to the characteristics of the current technology.  WSS infrastructure is very capital-intensive and long-lived, which gives rise to locked-in effects, while the monopolistic nature of the service makes innovation less necessary.  In addition, the individual elements of WSS systems have very different lifespans. Whereas piped networks can last for up to 70 to 100 years, the pumps needed to transport the water or wastewater have much shorter lifespans, and so do treatment plants.  This variety in lifespans ensures that the WSS system remains functional with relatively small upgrades. At the same time, the fragmentation in the sector may hinder not only the generation, but also the diffusion of new technologies in a sector where regulation tends to be more backward than forward looking.