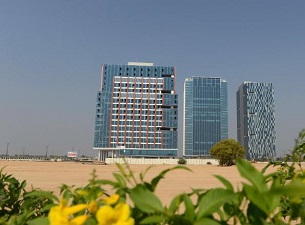 India is building a new city to give global investors an easy way into its booming economy.

Gradually mushrooming on an otherwise barren 886-acre parcel of land in Gujarat — Prime Minister Narendra Modi’s home state — is a small collection of buildings that India hopes will one day rival financial centers like Singapore, Dubai and Hong Kong.

“Except for the fact that we are not sitting in Singapore and GIFT City is not Singapore, I think from a business perspective we have everything that is required,” Ajay Pandey, the city’s CEO, told CNN.

Two stock exchanges were established in the city last year, and government exemptions recently made trading virtually tax-free. The city will also have its own financial regulator, part of an effort to reduce red tape and bureaucracy faced by foreign investors.

Pandey and other city leaders boast that the tax breaks, low property prices and other incentives mean that moving operations to GIFT City have helped some companies reduce costs by up to 80%.

“For a foreigner, landing in GIFT is more like landing in other financial centers,” said Dipesh Shah, who heads the city’s financial services operations. “It gives you all the competitive tax regimes which you are used to outside India.”

Foreign investors have long been attracted by India’s potential. Its economy grew by 7.2% in the final three months of 2017 — faster than China — after recovering from the effects of a shock cash ban and a disruptive tax overhaul.