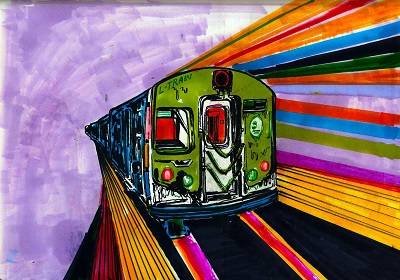 For a few days in early December, some 125 feet underneath the far West Side of Manhattan, New Yorkers were able to peer into a transit crystal ball.

At the gleaming 34th Street-Hudson Yards station, an “open house” was held to gather feedback from the public on the R211, the city’s subway of the future. The front of the train was curved and jet black, with the letter of the line profoundly illuminated. The doors were more spacious (eight inches, to be exact) than usual. A lit-up interior featured computerized displays that told passengers how many minutes until the next stop, and where exactly they’d be getting off at that specific platform. An “open gangway” model sat on display nearby, featuring accordion-style gaps between cars that run continuously, without division.

It was a peculiar site for a citizenry so routinely begrudged by systemwide delays, overcrowding, and station closures: a breathtakingly modern subway car that better resembled the sleek, hyper-speed trains of Asia and Europe, like something plucked straight out of Muskian fantasy. The car itself feels refreshingly innovative to step into—a sense of potential, at a time when fixing infrastructure in New York can appear so doomed. And in the coming years, transit models like these will define what getting around in America will look like, pushing the boundaries of what’s possible. (Which, in other words, is closer to what some other countries have already achieved.) The $3.18 billion prototype is slated to replace the aging cars on the lettered lines of New York’s underground by 2023.