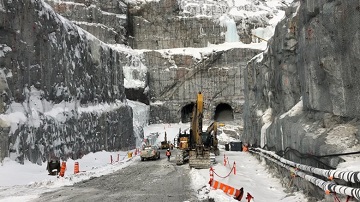 As reported on CBC News, work has stopped at the construction site for the Romaine-4 hydroelectric dam on Quebec’s North Shore after Hydro-Québec forced 250 workers to leave Tuesday, citing health and safety concerns.

Construction will resume in early January, but only if the company responsible for the workers, CRT-Hamel, comes up with a plan to make it safer, Hydro-Québec said.

“There have been several incidents that led us to believe that we need to have a recovery plan with the employer,” said Sandra Chiasson, a community relations manager with Hydro-Québec.

“We asked the employer to suspend the work as a preventative measure, before something happens.”

Hydro-Québec did not specify the nature of the problem, but four workers have died on the Romaine-4 site since work began in 2009.

The first death occurred in 2010, when a hoist operator drowned when his machine sank into a pond. Another worker drowned five years later when their excavator tipped into a water pit.

In both incidents, Quebec’s workplace health and safety board said they found “significant deficiencies” and “inadequate planning” that compromised the security of workers.

The third death, in 2016, came after a worker fell more than two metres and landed on a rock.

Later that same year, a fourth man died after a rock wall collapsed on the hydraulic shovel he was operating.

Work was temporarily suspended after the fourth death in 2017. Hydro-Québec also permitted union safety specialists to monitor the work on site.

“You work with tonnes and tonnes of rock. The weather conditions are very hard. And you are isolated in the woods, in the middle of nowhere,” said Yves Ouellet, the head of the construction wing of the Quebec Federation of Labour (FTQ) at the time.

Over a thousand workers are still deployed in other areas of the Romaine project.