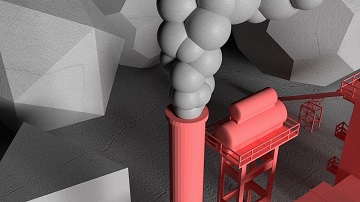 On a scorching July morning at a testing facility outside of Paris, a cadre of scientists, engineers, and architects wearing hard hats and safety goggles watched through protective glass as a machine molded a soupy, grey mixture into batches of brick-size blocks. Further along the line, a forklift operator carefully loaded the blocks into a curing chamber like loaves of bread in a bakery.

What they were witnessing was a trial run of a new concrete-making process developed by Solidia Technologies, one that the New Jersey-based company hopes will dramatically reshape the way this building material is made. By tweaking the chemistry of one of concrete’s essential ingredients—cement—and altering its curing process, the company says it can make concrete cheaper than the traditional process, while at the same time drastically cutting the carbon emissions associated with cement production.

Cement is one of the global economy’s most carbon-polluting industries. Responsible for about 8% of global carbon dioxide (CO2) emissions in 2015, if it were ranked with individual countries, the cement industry would be the third-largest greenhouse-gas emitter in the world behind only China and the United States. And this already outsized footprint is only projected to grow in the coming decades as economic development and rapid urbanization continue across Southeast Asia and sub-Saharan Africa. According to the International Energy Agency and the Cement Sustainability Initiative, by 2050, cement production could increase by as much as 23%.

This poses a significant challenge for combating climate change. One 2018 study estimated that cement-related emissions will have to fall by at least 16% by 2030, and by far more after that, if nations are to meet the 2015 Paris Climate Accord target of staying below two degrees Celsius of warming this century.

According to industry experts, reductions on that scale will require the widespread adoption of less carbon-intensive cement alternatives now under development in labs around the world. But in a market ruled by a handful of major producers wary of making changes to their existing business models, an absence of strong policies incentivizing greener technologies, and a construction industry reasonably cautious about novel building materials, the prospects for such a radical shift are far from certain.