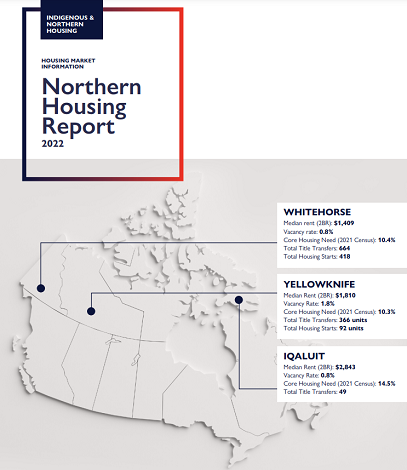 Housing suitability a persistent challenge in the North

An economic recovery, driven by an expanding mining sector and growing GDP, is underway in Canada’s North – according to a Canada Mortgage and Housing Corporation’s (CMHC) 2022 Northern Housing Report.

Home prices and costs rose in the North in 2021, as they did across Canada. Both ownership and rental markets saw stronger demand and prices pushed upwards. The higher costs of construction, skilled labor, and land, compounded with elevated interest rates, caused a disruption in the housing supply continuum. This limited the capacity to address housing demand and suitability needs across the North.

The rate of core housing need in the North and the territorial capitals of Whitehorse, Yellowknife, and Iqaluit is higher compared to the rest of the country, especially in Iqaluit. These supply and affordability challenges are why housing in the North is a strong priority under Canada’s National Housing Strategy (NHS).

You can download the entire 2022 Northern Housing Report here.

Budget 2022 committed $300 million over five years, starting in 2022-23, through CMHC, to co-develop and launch an Urban, Rural, and Northern Indigenous Housing Strategy with Indigenous partners to address the housing needs of Indigenous Peoples living in urban, rural, and northern areas.