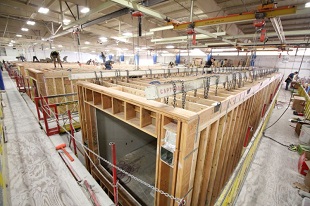 Modular construction is something like Legos — and hotel developers can’t get enough of the new building trend.

Built section-by-section in a factory, hotel units are shipped to a site and stacked, sometimes practically overnight. Hotel developers are pushing the high-speed, low-cost construction process so fast that suppliers can’t keep up and fill orders.

“I think the whole industry is looking at modular off-site construction. It is the only way to drive costs down and quality up… We like to build in a controlled environment, instead of in the war zone of a construction site,” said Mikael Hedberg, CEO of Finland-based hotel module manufacturer ADMARES.

Marriott will open AC Hotel New York NoMad — the world’s tallest modular hotel, with 168 rooms and 26 floors — in New York City by the end of 2020. Developers secured a $65 million construction loan for the project, according to reports. The project would have cost about $100.8 million with traditional methods, according to the HVS Global Hospitality Services hotel cost development survey. The average cost to construct a hotel is $600,000 a room, the survey said. Modular construction costs 30% to 50% less that traditional construction methods, according to an ADMARES representative.

But despite the emphasis on efficiency, the units will have to be shipped in from Poland — a common problem for modular developments. With only about six Marriott-approved U.S. manufacturers, demand has grown so quickly that U.S. manufacturers cannot keep up, said Paul Dille, marketing manager at Guerdon Modular Buildings, a leading modular hotel developer that has completed 12 modular hotels with over 15 more currently under construction.

“There aren’t that many [modular] manufacturers who can take on huge commercial projects like that in the U.S. — between five and, maximum, 10 in the U.S.,” said Antony Kountouris at Georgia-based BMarko, a modular construction company that is part of the wave of new facilities coming online to meet demand.