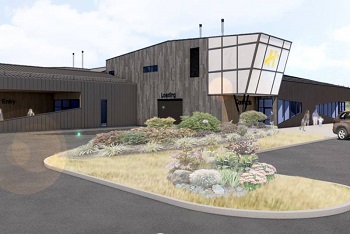 SYDNEY, N.S. — An official with the Horizon Achievement Centre hopes that ground could be broken as early as this construction season on its ambitious new facility, as it prepares to submit its funding proposals to the various levels of government.

Stephen Tobin, business development manager with Horizon Achievement Centre, said Thursday it is working with elected officials, particularly Sydney-Victoria MP Mark Eyking and Cape Breton-Canso MP Rodger Cuzner, to see how best to proceed with its funding applications, and which programs under which its proposal will best fit.

Once they are identified, there will be an additional formal application process required, Tobin said.

Sydney-Whitney Pier MLA Derek Mombourquette has also been supportive and the centre gave a presentation outlining its plans to CBRM council in December, he said.

They have received the support in principle of all three levels of government, Tobin said, and they will be seeking financial contributions from them for the $12.75-million facility.

“We feel very confident that we’re going to be able to move forward quickly,” Tobin said. “We hope to be back in front of council before the next budget deliberation as well.”

If everything was to go as those behind the project hope, work could start this construction season or, if some slight delays were encountered, that ground could be broken next spring, Tobin said. Construction is expected to take about a year.

The centre’s own contribution to the project would be $2 million, $1.2 million of which it currently has in the bank. It had embarked on a successful Chase the Ace lottery fundraiser with Royal Canadian Legion branch 138 in Ashby.

Tobin said they are confident they will be able to close the $800,000 gap in its own fundraising.