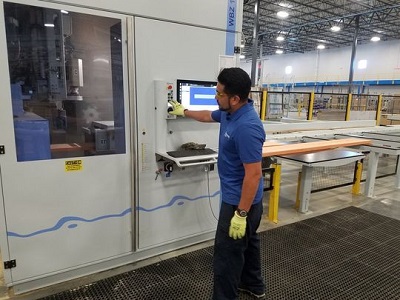 The construction of an American house embodies the spirit of the nation’s workers and the dreams of its citizens.

It’s also perhaps the least-efficient endeavor in the U.S. economy.

Dozens of workers turn a plot of land into a small factory, sawing wood, nailing it together, cutting holes for windows, running wires and pipes and installing drywall and other finishes. Four months or so later, voila: A home for generations of families.

Now, a worsening construction worker shortage that has driven up home prices is beginning to turn that routine – largely unchanged over the past century – on its head.

At a sprawling factory owned by Blueprint Robotics on the industrial outskirts of this city, a house frame – complete with windows, plumbing, insulation and electrical wires – is chiseled in large panels by computerized machines in about a day. The pieces of walls, floors and roof are then trucked to the construction site to be assembled in several more days. Although drywall and other features must still be added, the process – which has been used in Europe for decades – can shave the time to build a house by as much as half.

A new generation of prefabricated housing that bears little resemblance to the modular homes of old is among several technologies homebuilders are embracing to cope with the worker shortage. They’re also starting to deploy bricklaying robots and software programs that allow them to avoid miscommunication and delays.

“We’re at a tipping point where it’s finally just gotten too expensive to build the old-fashioned way,” says Margaret Whelan, CEO of Whelan Advisory and an investment banker for the home building industry.

Last year, at least half of homebuilders reported a serious shortage of framing crews, carpenters, bricklayers and other tradespeople, according to a survey by the National Association of Home Builders. The worker deficit is a big reason NAHB counted a four-month supply of existing homes in April, below a balanced six-month inventory. The limited stock is crimping home sales and has helped drive up national home prices nearly 50 percent since 2012, according to the S&P CoreLogic Case-Shiller index.

The emerging builder strategies already seem to be paying off, at least to some extent. Despite the labor crunch, 910,000 single-family homes are expected to be built this year, up from 851,000 in 2017, NAHB says. Yet there’s demand for 1.3 million, says Robert Dietz, the association’s chief economist.