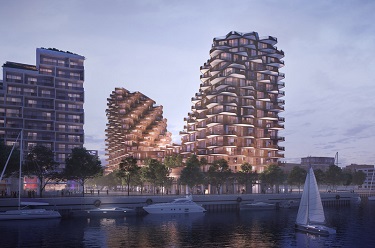 TORONTO, May 15, 2018 /CNW/ – At a ceremony held earlier today for dignitaries, partners, development industry colleagues, community neighbours and members of the media, international real estate firm Hines, and Canada’s leading condominium developer, Tridel, jointly announced their highly anticipated vision for the fourth and final phase of the developer’s waterfront residential partnership at Bayside Toronto in the East Bayfront District. Following an international design competition, the award-winning developers selected Danish firm 3XN as the Design Architect for the condominium, to be known as Aqualuna.

Avi Tesciuba of Hines Canada and Andrew DelZotto of Tridel, accompanied by 3XN founder and principal Kim Herforth Nielsen, released official renderings of the proposed lakeside condominium and offered insights into the design of the 16-storey terraced condominium building and the future of Toronto’s waterfront.

Inspired by his firm’s design of Aquabella, architect Kim Herforth Nielsen described 3XN’s intention with the design of Aqualuna to create “a landscape with two high points and a valley in between.” With 225 suites in the design, ranging from 821 square feet to an expansive 4,622 square feet, Mr. Nielsen explained that the design utilizes a deliberate architectural form that serves to “maximize the views to the water from each suite”. 3XN will be working with Torontobased architecture firm Kirkor Architects, who will serve as the project’s Architect of Record.

Toronto’s award-winning II by IV Design will create the interior design at Aqualuna, and the landscape architecture will be designed by Janet Rosenberg & Studio. This team will work to enhance 3XN’s decision to place the condominium’s shared amenities within the building’s ‘valley’, creating an interactive space in which the indoor amenities, such as community rooms and lounges, will interact with the expansive outdoor amenities.

Creating a lively urban environment, the podium of the building will have a double-height façade facing toward the Water’s Edge Promenade, with a through-block pedestrian connection as an extension of Edgewater Drive.  Development partners Hines and Tridel are proposing various public functions (such as retail, restaurants and cafes) for the ground floor in order to animate the sidewalks and activate the Water’s Edge Promenade adjacent to the building.

Selected as the developer of Bayside by Waterfront Toronto in 2010 following an extensive competition process, Hines, in conjunction with Tridel as its exclusive residential partner, has accelerated the delivery of the residential components which are critical to the original vision of creating a mixed-use master planned community of more than two million square feet of commercial, retail, cultural and residential development.

The first two phases of the Bayside Toronto community, named Aqualina and Aquavista, were designed by the world-renowned Miami-based firm Arquitectonica.  Aqualina commenced occupancy in the fall of 2017 and Aquavista is under construction and scheduled to occupy later this year.    Hines and Tridel then turned to Denmark’s 3XN for the design of the third phase Aquabella, and the fourth and final phase Aqualuna. Collectively, the four residential towers in the Baysidecommunity boast 988 condominium homes.

“As the pre-eminent development site in the Greater Toronto Area, and arguably the most prestigious and significant piece of Toronto’s waterfront revitalization efforts, the architectural vision for the site and its impact on the development’s urban planning was paramount,” says Avi Tesciuba, Senior Managing Director and Country Head of Hines Canada. “As such, we initiated a design competition for each of the four phases, in an attempt to secure the participation and input of the world’s greatest architecture firms. The addition of Arquitectonica, and more recently of 3XN has rewarded that desire by allowing us to benefit from the world-class approach and international perspective.”

“With the input of Hines and Waterfront Toronto, we were able to bring our experience as Canada’s leading condominium developer and our unparalleled insights into the local real estate market to create a unique opportunity for the city’s condominium purchasers,” notes Jim Ritchie, Executive Vice President, Sales and Marketing, Tridel. “With an unparalleled location, iconic architecture, luxury designs, and a commitment to sustainable and environmentally-sensitive development, Bayside Toronto has become Toronto’s most sought after residential community. The launch of Aqualuna will only serve to solidify that singular reputation for excellence.”

Hines, Tridel and Waterfront Toronto are proud to have created a collaboration that is delivering an award-winning, complete community with iconic architecture to Toronto’s reimagined waterfront.