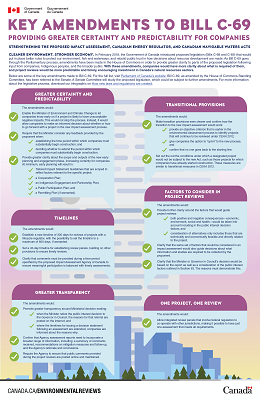 A fight over the federal government’s bill to overhaul the National Energy Board has been playing out away from the public eye but is expected to take centre stage in the Senate in September.

Behind the scenes, lower levels of government, companies and think tanks have been suggesting changes to Bill C-69 — which would turn the NEB into the Canadian Energy Regulator and establish an Impact Assessment Agency for new resource projects with a new scope and timelines.

At a recent meeting of energy ministers in Iqaluit, Saskatchewan’s Bronwyn Eyre said she and her counterparts in Alberta and Ontario raised concerns with the bill, which she called “an existential threat to our competitiveness.”

“It is the least-reported development that poses the greatest economic risk. I think there are no bones about that,” Eyre said, adding her government is considering appearing before the Senate to raise their concerns.

Similarly, Alberta Energy Minister Marg McCuaig-Boyd said her province, which has supported the federal government on several energy and climate initiatives, has “serious concerns including ‘what does this mean for project timelines’.” She said Alberta is seeking to influence the implementation of the regulations even though the bill has passed through the Commons.

McCuaig-Boyd, Alberta Environment and Parks Minister Shannon Phillips and Indigenous Relations Minister Richard Freehan wrote their federal counterparts earlier this summer, saying “energy leaders are voicing their concerns about many of the federal government’s proposed changes and Alberta shares many of those concerns. Many have suggested they will not be making new investments in our country.”

When the Senate resumes sitting in September, Bill C-69 will have its second reading in the upper chamber and then head to a committee hearing.