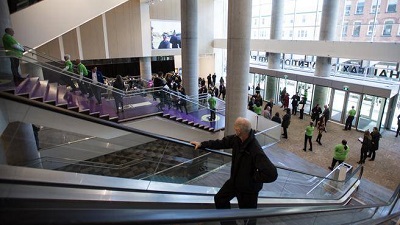 It would have been easy Friday to get all misty-eyed standing on Argyle Street, on the block between Sackville and Prince.

To lapse into a romantic haze recalling the history that was written when the predecessor to this paper made its home on that very spot.

To feel the imagination swell thinking about the enterprises and human comings-and-goings that preceded the Herald.

Most days, if you are so inclined, you can stand precisely there, in the middle of this salt-licked, time-lashed city, and cast your mind backwards, to revel in the past.

Except Friday was not one of those days.

Friday—when some of us had our first peek inside the new convention centre which has arisen, all gleaming glass and metal, where the Herald once stood—was all about the future.

The centre, the 600 guests heard at least twice, is a “game-changer”, as well as being an “iconic” building, and the kind of “world-class” development that a “world-class” city like Halifax deserves.

On the crowded stage at the front of the event, Joe Ramia, the building’s developer, said that he felt “pride, gratitude and, yes, a whole lot of relief” before calling his progeny “a new paradigm for Halifax and the province.”

An old hand at such things, Treasury Board president Scott Brison–who noted that the federal government had given the development $51-million of its $170-million in public money—said the convention centre would do for the future of Halifax what Pier 21 had done for the past.

Mayor Savage, for his part, said the new convention centre would bring lots of spending to the city and help “connect us to the world.”

Premier Stephen McNeil—perhaps noting in the crowd the presence of Peter Kelly, who was thought to be no friend of development while mayor of Halifax–called the new convention centre the “impetus for development all across this city.”

On cue, the crowd, which included its share of politicians, government employees and members of the business community, responded to the applause lines.