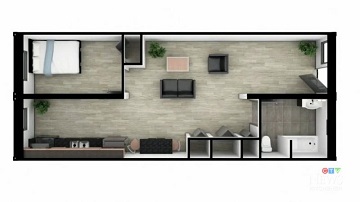 The City of Guelph is considering a project that would build homes for people with drug addictions out of shipping containers. The project is being spearheaded by the Wellington-Guelph Drug Strategy.

“They would either be a unit for a single person or a couple,” explains Adrienne Crowder.

“They are 320 square foot modular homes. They are quite nicely finished, they have a really nice bathroom, kitchenette and living space.”

The units would cost about $45,000 each, with the added bonus of quick setup due to their modular design.

The current homeless population in Guelph is more than 325 people and growing.

“Get people out of shelters, out of tents down by a river, into housing so they can take the next steps to get back into a more stable life,” says Coun. Rodrigo Goller.

A number of city-owned properties are being considered to house the development, including Beaumont Crescent.

While city staff is still trying to secure funding and a final site for the proposed project, not everyone is on board.

“It’s just not ideal to have containers in our backyard,” says Rebecca Marshall, who has lived in the Beaumont-Sloan neighbourhood for more than a decade.

“We were actually kind of hoping the city would build a park here for the kids.”

Crowder stresses that the site is just being qualified, and that public consultation is still needed and is a “very important part” in the process.

A report to council on whether the site on Beaumont is viable is due in the new year.

Watch the video on CTV News