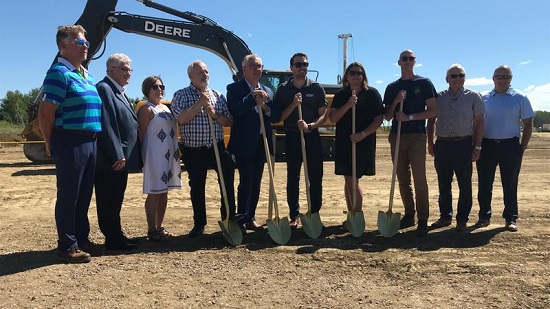 It’s been a long planning process and it will give way to an even longer building process, but Prince Albert is officially moving closer to a brand-new recreation facility.

With two full-sized hockey rinks capable of holding hundreds of spectators and a massive aquatic centre, the new Aquatic and Arena Recreation Facility will be a huge undertaking.

The city officially broke ground on the project Thursday, with civic and provincial government representatives on hand, as well as representatives from minor sports organizations.

“It’s been ten years in the making that we’ve been talking about it,” said Tyson Dallman, director of hockey operations for Prince Albert Minor Hockey. “Over the last couple of years, with some plans and details finally emerging, now to be here today actually breaking some dirt, it’s exciting.”

The facility itself will be a boost for minor sports, but for many what will be just as exciting are the businesses that will spring up around it. Hotels and restaurants are in the future plans for what will be a district built around the facility. Part of the hope is this will make Prince Albert a more attractive spot for tournaments.