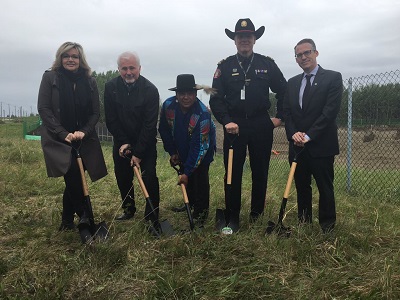 The arrest processing section of the Calgary Police Service has been housed in a downtown building for nearly 60 years and on Thursday officials broke ground on a new facility in the city’s northwest.

Police and government officials gathered at the site of the Spyhill Services Centre, at 12500 85 Street N.W., for a ground breaking ceremony at 11:00 a.m.

The new building will be home to the arrest processing unit and will sit on 3.15 acres of land that has been leased from the province.

“The facility we have now is decades old. It is structurally not sound, in terms of the ability for prisoners to hurt themselves in there, it’s very segmented, it’s not very respectful to people’s identities or their cultures. It’s in the part of the city that doesn’t allow for proper officer safety and prisoner handling. It’s now become surrounded by the new development downtown so this facility, first, allows us to design it in a certain way that shows dignity and respect and care for the human rights of people that we have in our detention,” said Calgary Police Chief, Roger Chaffin. “This will be very reflective of a modern police service.”

The 4552 square metre building will be built with energy efficiency in mind and will have a green roof and energy-saving fixtures and devices.

“It’s considerably bigger than our current facility, it’s quite small. The nice thing here is we’re able to bring people in in a safe environment, we’re able to bring our vehicles in under cover. We’re able to show some respect and dignity for people so not marching them through the downtown core as they go through arrest,” said Chaffin.

Officials say the new building is close to the Calgary Remand Centre, the Calgary Correctional Centre and the Calgary Young Offender Centre, which is one of the reasons why the site was chosen.