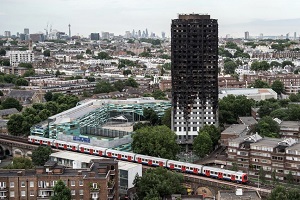 Grenfell Tower site to be turned into memorial to fire victims

The site of the burnt-out Grenfell Tower in west London is expected to be turned into a memorial to the 72 people killed in last year’s disaster.

A government document outlining the potential future uses of the site state the “voice of the bereaved” will lead the decision-making process.

The most likely outcome is a memorial on the site of the tower, as well as the renaming of nearby Latimer Road tube station, according to the document, titled Principles Governing Consultations on the Future of the Grenfell Tower Site.

“The common assumption is that this consultation will lead towards agreement on a fitting memorial to remember those who lost their lives, and a request to Transport for London for the renaming of Latimer Road Underground Station to commemorate Grenfell Tower,” the document states.

The document is signed by the leader of the local Kensington and Chelsea Council, as well as the communities and local government secretary and an organisation representing the victims of the fire called Grenfell United.

Victims will be “at the heart” of decision

“We are pleased that eight months on from the fire we finally have agreement that the bereaved, survivors and community will be at the heart of deciding the legacy of the site,” said Shahin Sadafi, chair of Grenfell United. “We hope working together to create a fitting memorial will be part of a healing process for everyone affected.”

The tower is expected to be demolished towards the end of 2018, when police forensic teams have completed their work.