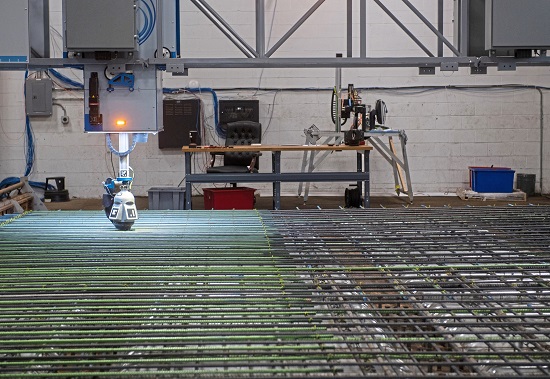 Gearing up for infrastructure spending, Advanced Construction Robotics has a solution to the construction labor shortage

Before heading out to its first job, TyBot had to get permission from a union representative.

An autonomous robot that ties rebar — the reinforcing rods that are used in building structures such as a bridge — TyBot was putting in a weekend shift after its human counterparts had placed the rebar. Because that was work those humans expected to do after the weekend, the union had to sign off.

In charge of getting that approval was Stephen Muck, CEO of Brayman Construction Corp. in Clinton Township, Butler County, and co-founder and CEO of Advanced Construction Robotics, a tech company in Hampton that is working to automate parts of the construction process with machines like TyBot.

Three days later, he got a call from the same job site: The workers had finished placing another layer of rebar and wanted to robot back to finish its job.

“That was a very early indication of the attractiveness and acceptance of the tool in the field,” said Mr. Muck, who calls the machine a “job enhancer.”

Machines like TyBot, or IronBot, Advanced Construction Robotics’ newest product that will autonomously carry and lay rebar, may be the solution to a labor shortage that has been brewing for years, according to the engineers and entrepreneurs working to automate parts of the construction process to make work safer and more efficient.

Keep reading in the Pittsburgh Post-Gazette