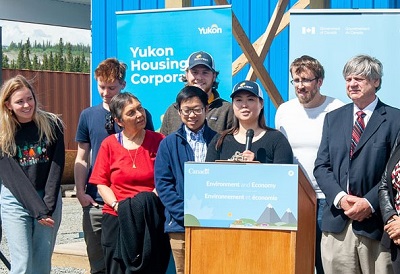 As reported in the Whitehorse Daily Star, increasing energy efficiency in Yukon homes and buildings was at the centre of $41.3 million in initiatives announced Friday afternoon in Whitehorse.

Yukon Liberal MP Larry Bagnell, Yukon Housing Minister Pauline Frost and Energy, Mines and Resources Minister Ranj Pillai held a joint press conference to explain how the funding will be allocated over the next three years.

The money is to assist with retrofitting the public housing stock managed by Yukon Housing and providing builders with an incentive of up to $10,000 to build homes to higher building code standards.

Bagnell pointed out the 65 per cent of new homes in Whitehorse are already being built to a super-insulated standards.

“I want to take a moment to thank our local construction industry for enthusiastically embracing this incentive and for building new houses that are the most energy efficient in Canada,” Pillai told a gathering at Titanium Way in the Marwell industrial area.

“We will work with First Nation governments, municipalities, businesses, landlords, and homeowners to deliver a suite of new and expanded energy retrofits programs over the next few years.”

Of the $41.3 million, $31 million is being contributed by Ottawa over the next three years from its Low Carbon Economy Fund, $8.6 million will come from the Yukon government and First Nations are expecting to contribute $1.7 million.

We know that, now, more than ever, we need to take action on climate change,” Bagnell told the audience.

“A report this year showed that Canada is warming at twice the global rate, and here in the North, it’s three times that.

“Through the Yukon, communities are declaring climate emergencies, and back in the House of Commons we’re debating about whether or not the whole country should declare one.”

Bagnell said in addition to reducing carbon emissions, the funding will create jobs.