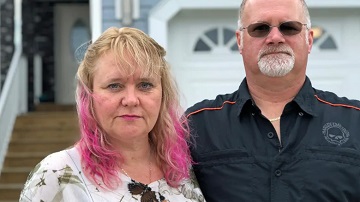 Fort McMurray residents who lost it all in wildfire face delays, liens and lawsuits in fight with builder

The developer promised people who’d lost everything in the wildfire that ravaged Fort McMurray, Alta., that it would rebuild their homes so they could “get their lifestyle back.”

But some of the folks who signed with BristleCone Homes say they faced a slew of delays, liens and failed inspections while waiting for their homes to be built — and, in two cases, lawsuits after trying to part ways with the company.

Bill and Carrie Pendergast’s two-storey home was reduced to six inches of ash in the wildfire that tore through town in May 2016.

The wall of fire was so massive its plumes of smoke swept across North America, causing air pollution to spike as far away as New England.

“It looked like a nuclear bomb had gone off,” said Carrie, a 56-year-old energy sector worker.

“The only thing left was metal,” said Bill, 55, who also works in the oil industry. “We had a single steel fridge in the garage. Even that was folded down like an accordion.”

The Pendergasts were among the first to sign with BristleCone Homes in early 2017.

Carrie says she was won over by the company’s charismatic owner, Kunal Nagpal, at a trade show in Fort McMurray in November 2016.

“He was our saviour,” she said.

Her husband described Nagpal as a “very, very good talker.”

“It was like, ‘Everybody has lost everything. And I’m your new best friend. I’m going to, you know, look after you.'”

BristleCone Homes was issued a total of 13 building permits, according to the Municipality of Wood Buffalo. CBC News contacted 10 of the homeowners — not one of them was satisfied.