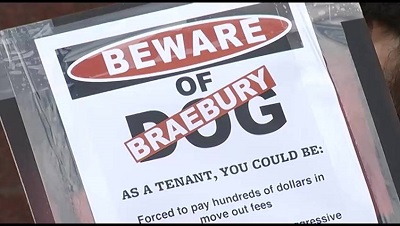 Several former tenants of a Kingston, Ont., apartment rental company are complaining they were charged “illegal” fees when they moved out.

The fees include $250 for carpet cleaning, as well as a number of other “punitive” charges, such as $90 to install light bulbs and $50 for failing to change stove-top drip pans, according to former tenants of Braebury Properties. They have refused to pay these charges and they say have since received threatening and intimidating phone calls from a debt collection agency.

Braebury, meanwhile, says it is willing to discuss what it describes as “damage or repair charges” with former tenants, and has told CKWS News that a campaign against the company is “bullying and/or extortion.”

The former tenants have teamed up with the Limestone Solidarity Network to launch a “Beware Braebury Campaign” to demand the rental company cease charging what they are calling “illegal and unethical move out fees.” The tenants and the network held a demonstration and news conference outside Braebury’s head office at 366 King St. East on Monday to discuss the campaign.