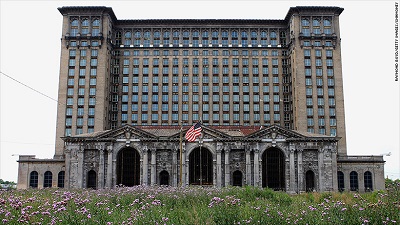 Visible from miles around, the 18-story building has been abandoned for decades and is, literally, a mere shell of its former self.

Now Ford has purchased the crumbling building and on Tuesday will announce plans to make it part of a major technology center.

“I remember the train station when it was vibrant and it was an awesome place.” Ford chairman Bill Ford said in an interview with CNN’s Poppy Harlow.

Built in 1913, the Michigan Central Station was once a symbol of Detroit’s importance as a center of American industry. Designed by the same firms behind New York City’s Grand Central Terminal, the Detroit building included both a train terminal and a rectangular office tower. When it opened, it was the tallest train station in the world.

At one time, thousands of people passed daily through its enormous bronze doors. Visitors walked on marble floors, under an arched ceiling 65-feet high. Light streamed in from tall windows or came down from chandeliers.

Now, when photographers want to show the decay of the city of Detroit, they often turn their cameras toward the hollowed out Michigan Central Station.

“It was like a knife through my heart,” Ford said of the images.

The ornate tile-work is gone from its ceiling and paint has long ago peeled away. For a long time there were no windows, leaving wind, rain, wildlife, not to mention vandals, free to go through the building. The windows, at least, were replaced a few years ago.

Now, the building will be fully restored and its first floor re-opened, Ford said. There will be restaurants, shops, bars and cafes, with offices on the floors above.